10 years ago my wife Catherine and I interviewed for a new post of Office Administrator, to help with all of the admin tasks that were starting to mount up, as the business grew.  That was when we first met Sue Waine, who agreed to join us after leaving her job, with HMRC.

Sue worked initially on a part-time basis and did a great job dealing with all that was thrown her way.  She quickly passed her trial period, even after “the finger nail incident” (best not to ask!)

Sue soon became interested in studying accountancy, so we took the decision to enrol her as an AAT student and sent her off to night school.  Two years later she qualified and became a full member of AAT (MAAT).  This enabled Sue to take on more accountancy tasks and she quickly became our personal tax return and payroll specialist (amongst all of her other duties).  She quickly became popular with all of the clients that she dealt with and her role soon became full time.

5 years later, she became a Fellow Member of AAT (FMAAT) and her certificate is proudly displayed on the office wall.

So, now after surviving 10 years in her role, Catherine and I hope you will join me in thanking Sue, for all of her hard work and loyal service – a lot has happened during this time, who knows what the next 10 years has in store?

The following press release was made by Rotary District 1260, on behalf of Buckingham Rotary… 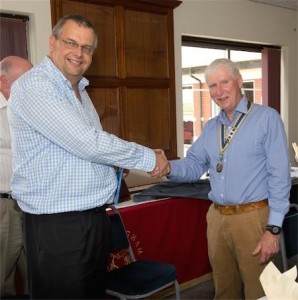 At its customary lunchtime meeting at Buckingham Golf Club on Monday 19 May, Buckingham Rotary was pleased to add yet another new member to its growing ranks.

Introduced to the club by former Mayor Cllr Mike Smith, Henry is a well-known and popular Buckingham businessman of many years standing. During his brief and succinct acceptance speech, Henry stressed that despite his name he was not a boxer; and nor was he related to a former comedian. Also well-known at Silverstone for his marshalling work, Henry expressed pride and delight at being accepted as a member of Buckingham’s foremost charity fund-raising organisation, and looked forward to joining his many new friends in Rotary’s extensive work.

On behalf of Buckingham Rotary, President Nick told Henry that the club recognised that he was a busy person who may be unable to devote as much time to Rotary as he would like. “But we welcome busy people”, said Nick; “they are the ones that get things done”.

We are pleased to announce that Tracey Hobbs from Prestige Commercial Cleaning, is the latest winner in our “refer a colleague” prize draw.  She has already received her Silverstone super choice voucher and will soon be lapping Silverstone in her choice of car, we hope she has great fun and doesn’t make Lewis or Jenson, too worried for their jobs!

Here is what Tracey had to say about her business:

“Based in Aylesbury covering Bucks, Oxon, Northants, Beds, Herts and West Midlands, we are a growing reliable and friendly company , customers satisfaction and attention to detail are our main priority.  We have successfully secured a large contract for a further twelve months with a very prestigious local golf & country club cleaning 364 days per year, as well as a range of large offices, clinics, public conveniences, new build cleans and end of tenancy cleans to name but a few.  If you would like find out more please take a look at our website www.prestigecommercialcleaning.co.uk or call us on 01296 641775 we would be very happy to help.”

SMEs in the dark about changes to the PAYE system

One in three SMEs has no knowledge of Real Time Information (RTI) and what it means for their business, according to a recent report from AAT (Association of Accounting Technicians). This is despite the major changes to the PAYE system coming into effect from April.

The survey of 1,000 decision makers, managers and directors of SMEs carried out in January this year, revealed that:

Of those who are aware, one in three don’t know if their payroll is set to cope with the changes

The lack of understanding about these major changes also revealed that 30 per cent of those businesses that were aware of RTI didn’t know if their current software or payroll could cope with the changes.

With HMRC issuing onerous penalties for those businesses that don’t comply, it may come as no surprise that 35 per cent of SMEs are worried and concerned about the cost involved and a further 30 per cent are worried about how time consuming it will be to implement .

As our economy currently flat-lines and David Cameron states that SMEs, startups and entrepreneurs are vital for the future of our country, 25 per cent of businesses think that the implementation of RTI will affect their overall business growth.

Half of SMEs also believe that the complexity of the tax system favours big business.
Forty-three per cent think that HMRC needs to take responsibility and address those organisations suspected of tax avoidance to ensure a more level playing field – putting a stop to “sweetheart” deals.

Almost half (49 per cent) of SMEs were quick to explain that startups and entrepreneurs face major difficulty within the UK to get their business ideas off the ground because of the lack of capital made available to them. There is much work to be done to raise awareness of lending and cash flow initiatives so that entrepreneurs are made aware of the opportunities and feel supported.

With nearly half of SME enterprises unaware of the finance lending initiatives available to startups and entrepreneurs, so much more needs to be done to educate them about their options.”

“The lack of understanding about RTI clearly indicates not enough has been done to guide small businesses through the massive changes to PAYE which will have a big impact on time, resource and spend for small enterprises. It’s a distressing situation given April is fast approaching.”

Henry Cooper FMAAT has been named as the new President of AAT (Association of Accounting Technicians), the leading professional education and membership body for accounting staff.

Henry was installed as President at the Association’s AGM on 18 May.  As President, he will be a key AAT ambassador, speaking at events – both within the UK and overseas – and promoting the benefits of professional education and training within the accountancy profession.

Henry initially finished school with one O-Level. He completed the AAT qualification after working at the Royal Mail and Fremantle Trust, before taking a position at Quanta Consultancy Services, supporting its UK and European divisions.

In 2001, he decided to become a member in practice – establishing BirchCooper Accounting Services which provides small businesses and start-ups with a full range of accountancy services.

“My experience has made me a strong supporter of the AAT’s Members in Practice scheme and I thrive on any opportunity to speak about and promote the programme,” Henry said.

Speaking of his new voluntary role, Henry said: “I want to be an accessible President. I’m keen to meet as many students and members as possible. I hope to do this, not just by the usual means, but by using social media and other channels as well.

“To be President of such a well-established and respected professional body is a privilege. The AAT qualification is world class.

“If I want to see one thing change, it’s the misconceptions by many of our members who think they have to achieve chartered status in order to be viewed as a credible accountant. These people often don’t realise that they can stay with AAT throughout their entire career, continuing their learning and development along the way,” Henry said.

Speaking of Henry’s appointment, AAT Chief Executive Jane Scott Paul said: “I am delighted to be able to introduce Henry as our new President. He has been an outstanding Vice President over the past year and I have all the confidence that he will continue to shine as he takes on this new role.”

Our Sue will be taking part in the Race For Life on 17th June 2012.  If anybody would like to sponsor her, here is the link to the “Just Giving” page http://www.raceforlifesponsorme.org/suewaine5

We wish her the best of luck!

We are pleased to announce the lucky prizewinners in our recent prize draws.

The first draw was for clients who had recommend us to a colleague, who went on to become a client.

The winner was Ralph Stobart of Bright Lake Consulting Limited, Bright Lake Consulting works with medium and large private and public sector organisations to help them improve performance. They use a participative approach to design how clients can find sustainable solutions and lasting improvement. They work with leaders and staff, enabling them with methods to follow the customer’s journey through the organisation and then help them to use this knowledge to challenge and improve.  Congratulations!

The second draw was for participants in our recent customer survey.

They each win a Silverstone Super Choice Voucher, to partake in a track experience of their choice at the SIlverstone Race Circuit.

We will be holding further draws in the future so watch out for further news.

This is just to let everyone know that our opening hours over the festive period, will be as follows:

Finally, please do not forget the 31st January 2012 deadline for electronic submission of personal tax returns – ALL late returns will incur a penalty of at least £100, whether or not there is any unpaid tax.

We are delighted to announce Henry Cooper was installed as the Vice-President of the Association of Accounting Technicians (AAT) for 2011/2012, at the AATs AGM on 20th May 2011.    This means he will become the President of the AAT for 2012/2013.  Henry is delighted and extremely honoured to have been given this opportunity.